The Amsterdam Gay price is the annual gay festival celebrated in Amsterdam which happens in the first weekend of August. The event has been organised for 15 years and each year there are more activities than the year before. The highlight of the weekend is the boat parade along the canals, as well as several street parties on Friday evening.. What's crazy about this event that most boats in the parade have themed boats, which range from the expected to the very unexpected themes. It's kind of a mini-carnival meets a mini-Queen's day. 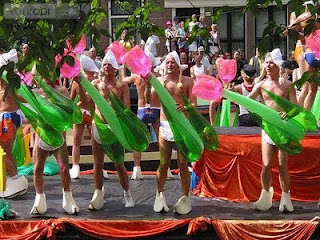 Unluckily this year the weather was horrible and even though the festivities continued there were less people around the streets.  A friend of mine had planned a bbq on his rooftop from where we would have been able to view the busy canals. However the plans had to be modified due to the incessent rain; the bbq was still held on a covered balcony. The other guests and us were all tucked in cosily in the living room.  It was a great afternoon, catching up with some of my friends who I see less often now that I don't live in the neighbourhood. I also got to talk with other people, some who are new to the Netherlands. What impressed me was that a few of the guests who had never met my boyfriend swore that he didn't look Dutch, or from other nothern European countries. Some even thought he was Maltese! It was hilarious since to me he really has a typical Dutch physical appereance. I guess it's easy to think he was foreign seeing that there were only 3-4 Dutch people in the apartment of 30 foreigners! 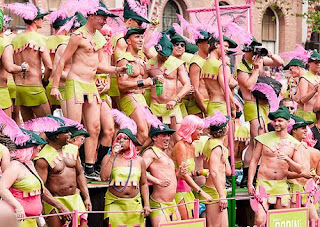 Saturday also marked the annual Dance Valley festival. Last year I went to the festival and had a blast dancing to music during a nice warm summer day. Rain though ruins some (or most in my opinion) of the greatness of the festival since most stages are on the outside. The few indoor tents cannot hold all the people, so they will be too full to enjoy them either. So all in all  I didn't regret that I wasn't in the valley this year! It surely was a mud-fest! On the train back home we did see some people returning back from the festival and they were indeed completely covered in mud!

The photos are all from previous years since I didn't have my camera with me last weekend!