Growing up in Malta Halloween weekend was never a big thing. We never dressed up or went trick or treating. I always assumed it was an American thing. However in Holland many people celebrate it. So in the past years I've been dressing up and going for parties at friends. Some people really put an effort in the costumes.  Others just want to go to a place with free booze so they find some item to use as a lame excuse for a costume.

This year a number of my friends are going to the Halloween boat party "Slaughter on the Water" which sounds like great fun. Unluckily I cannot join. Luckily I have other interesting plans. This weekend we're off to Germany for a nice relaxing weekend. Having a personal sauna in our lodge will beat going to a Halloween party and acting crazy for a whole night! Or at least I hope so!

Memory Lane: Last year I was dressed up as the genie in the magic lamp. I was giving a free wish to everyone at the party. Luckily I could grant many of the wishes since it seems everyone was asking for a drink to show up. Magically the lamp was filled with alcohol and I could give the wish away.

And for anyone asking the lamp contained wine in it! 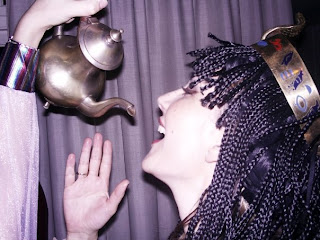 Email ThisBlogThis!Share to TwitterShare to FacebookShare to Pinterest
Labels: dressing up, halloween, sauna, trick or treat