Our garden is definetely a spider nesting area! In the first months living in the house I used to try and remove the spider webs regularly but they always came back the next day. I never minded spiders until I saw the size they can grow into. We've got mutant ones who make huge webs and in turn prey on large mosquitos. Sometimes it's fascinating seeing them prepare the web, mostly though they're just a nuisance.

Spiders are protected insects, thus we cannot buy something which will kill them. However we did find a more humane solution. We got a spray that will not allow the web to stick on the surfaces, so the families of spiders have to move somewhere else. We're going to try it out soon, I really hope that it works out, otherwise we need to get the Spinbusters (aptly named like Ghostbusters). 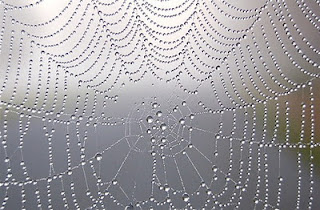 You would think why is our house full of spiders? There seems to be a reason which is not related to us living directly by the water. The newly built areas in the Hague were green areas before they were built on. They were areas where spiders lived. Once the building process started, the spiders relocated in the buildings structure and never moved out.