Unusual accomodation in the Netherlands

After reading Clare's post about strange hotels around the world, I started to wonder what Netherlands has to offer in terms of strange hotels and houses to live in. Netherlands is a country which is quite liberal and crazy so I was sure that I will find a lot of original places that you can lodge at while visiting. 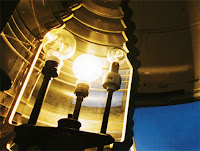 Apart from sleeping in a harbour crane as mentioned by Clare (I hope you're not afraid of heights if you do that!), you can also sleep in a lighthouse in Harlingen. Imagine sleeping in a unique place that was so useful in times without modern technology.

This is not where it ends though. You can spend the night in a former lifeboat. You can sleep in the harbour or ask the caption to cast away the lifeboat.
While in Amsterdam you can decide to sleep on an altar! There is surely no comparable accomodation to be found in Amsterdam since the bedroom is located in what used to be the chapel. This house was a shelterchurch for roman catholic people who were persecuted in the 18th century.
Otherwise you can decide to sleep in a concrete bunker which are built into the earth of a working farm in Woudenberg.

If you're not a tourist and want to live for a longer term in the country maybe you should try to find a boat house to live at. They are all across the waterlands of the country. Some of these boat houses can also be more modern than the traditional boxed shaped boat houses. Such as this boathouse on the Amstel river.

Another option is to live in one of the Cubic houses in Rotterdam. These houses are quite disorienting from the outside but inside everything is in the right place and every nook is utilised for something.
Posted by Cola at 9:00 AM