Climbing last weekend was successful. I went there feeling much more scared than I was during all the weekend. In fact I'm really proud of myself. Sometimes it would also be nice that I don't worry so much about everything!

I learned a lot and I now know how to secure myself on top of a climb, how to secure a partner from top while he's climbing and I also learned how to create an abseil for the team and also for myself. These steps are the main steps one needs for climbing outdoors.

We were lucky and had good weather all weekend, so good that while climbing I was feeling really hot. It might had to do with all the exercise though!


My body might be slightly confused at this point since in the last couple of weeks I trained much more than usual. I have now started jogging a few times a week in the country side around my house. It's so nice to be able to be away from the city's hustle and bustle in a just less than 5 minutes. And even though the weather in Holland hasn't been what one expects at this time of year many evenings have clear blue skies, which makes everything look like a picture on a postcard. 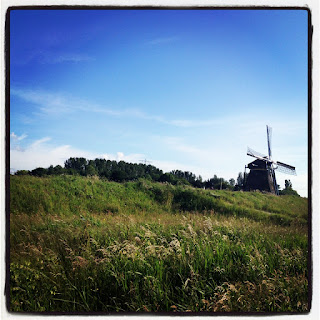