In my childhood I never owned a bike. Not many kids owned one in Malta. My cousin did have a bike which she lent me every now and then. So I learned to bike in a straight line but nothing else. I could not turn around without needing an area as wide as a football pitch.

So when I moved to Holland around 5 years ago I was faced with a problem. A twenty-something girl with no idea how to ride a bike having to start using a bike in the busy roads of Amsterdam! When I got my first bike I didn’t use it for ages. I think secretly I was hoping for it to be stolen, like most bikes in Amsterdam. Unluckily I had good locks and nothing happened to the bike. At some point I decided to teach myself bike riding. So I did; it took time and a couple of falls but now I can cycle a couple of kilometres without serious accidents.

I’m still not a proper Dutchie. The Dutch, while cycling, can answer calls, hold an umbrella while having a couple of kids and a dog on their own bike.

Hints of cycling in the city:

• Avoid tourists. No matter how much you ring your bell they will not move from the bike lane
• Be careful of wet tram lines
• Always carry wet proof clothes
• If you’re a beginner never answer your mobile phone while riding the bike

Since my last move over six months ago I didn’t have a bike. Last weekend we finally found a bike that I liked (and that also fit my height). There’s no more need for my boyfriend to piggyback me everywhere. Unluckily for me it’s time to make my own pedalling. 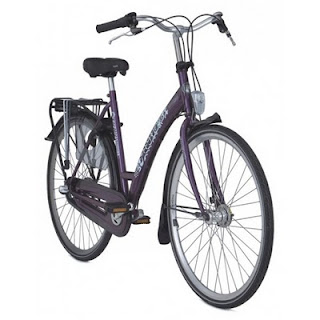