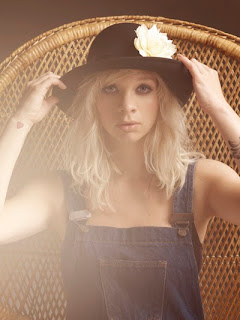 This weekend we headed to Groningen in the north of Netherlands. It was the first time for me to head this north in the country. Once we left the Randstad, the area which consists of the 4 largest cities of the Netherlands and makes up around 2/3 of the whole Dutch population, the countryside changed to vast expanses of green. Green dispersed with large amounts of water. This area called Flevoland didn't even exist until the sixties. The Dutch are well known for reclaming land and this was one of the reasons they are famous for having most of the country below sea level!

The reason we headed to Groningen was to go for Jacqueline Govaert's concert. The concert was at a small location, much smaller than Paradiso in Amsterdam. The atmosphere was great since we were really near the stage and it felt like we were really part of the show. The concert was to promote her first solo album since she left the band Krezip. I had discovered Jacqueline just before Krezip stopped playing together and was sad that I never managed to go to their concert seeing that they were local! So once the Good Life album came out I was ecstatic.

Just after Jacqueline came on stage I thought she hadn't lost the baby weight yet of her first kid but then I noticed that she was pregnant. Now I think pregnant women are nice and are usually very radiant, however I don't think it looks very nice on stage when the mother is prancing and jumping around. It just feels wrong!

All in all we had a great time up north.